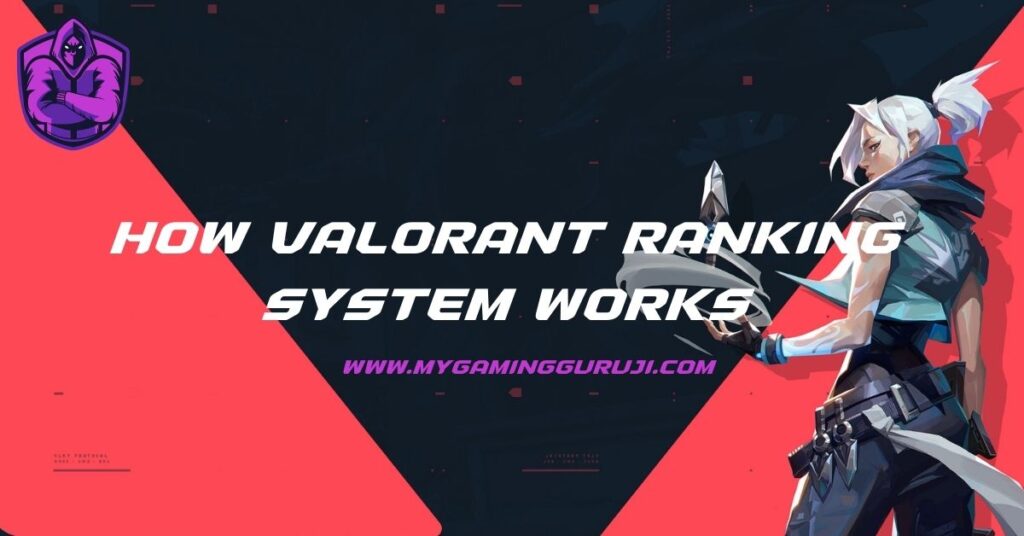 Valorant competitive ranked mode is for those who enjoy FPS multiplayer games and have a competitive streak to spare. Riot Games has added even more content to its 5v5 FPS shooter, making it even better than it was when it initially started.

You’ve mastered your favorite Agents and are ready to go on to the next level. Now it’s time to find out who’s the greatest in the community. Compete with others of the same mind and get to the top of the regional leaderboards. It’s all yours if you’re willing to accept the task.

Having a basic understanding of the ranking system is a good idea before engaging in a competitive match. Learn how Valorant’s ranks function, how to progress ranks, and how the game’s acts factor into ranking.

Valorant ranking system can be a little hard to understand for new people. Compared to other multi-player ranking systems, this one has a few things that are unique to Riot Games.

Getting into competitive or ranked mode isn’t something you can just do on a whim at the start. You must play 10 unrated games before you can play competitive mode in the game. If you played 20 unrated games when this new mode first came out, you could get it right away. Because games are easier to finish than matches, trolls and smurfs flooded the matched competitions and caused a lot of problems.

Riot Games came up with a way to “raise” the unlocking requirements in the form of match completions. It’s not a perfect solution, but it takes a lot more work and dedication to finish matches than it does to play a few easy games.

Following your 10 unrated match wins, you need to play five placement games. It helps the game figure out where you should start in the rankings.

There are eight ranks or divisions in the Valorant ranking system:

To move up to the next rank, you have to go through the first six levels or sub-ranks. Each level has three levels or tiers. Each of the last two ranks, Immortal and Radiant, has only one tier in it. Including Unranked, there are 20 ranks in Valorant, which is a lot.

The Iron rank is where most players start out, but their performance in placement games can move them up to a higher rank and tier. For example, very good players may be able to skip four levels and start at Bronze 2.

Also, when you play Competitive mode, you can move up and down the ranks and tiers as you go. It all comes down to your MMR or matchmaking rating, how well you did, and how many frags (kills) you got in a match. Make sure you stay on top of your game if you want to move up a rank quickly! Win a lot of games at once, and you might move up the ranks faster.

Some online multiplayer games make it more fun for people to play by making their “ranking decay.” In other games, if a player doesn’t play for a set amount of time, their game-rank starts to go down.

Rank does not go down in Valorant, so you can take breaks if you need to. You may also have to play a placement game if you’ve been away from the game for too long. Helps you figure out how good you are after a long break and if you can compete at your old rank.

From a competition point of view, it makes sense. Riot Games wants to make sure that you’ll play in games that are right for your skill level. To help you get back into the swing of things, play a placement game first. The last thing you want is to go back to competitive mode and find that you’re a little rusty and out of your depth.

You want to find out how you compare to other players in your area.

When Valorant’s Episode 2 came out, it had a new feature for people who like to compete: the regional leaderboards. In the leaderboard, you can see your rank and rank rating, as well as your Riot ID and player card. It’s possible to change your personal information so that it says “Secret Agent” instead of your real name.

To make things worse, as soon as competitive mode starts up, you won’t be able to see how high up on the regional leaderboards you are. Play at least 50 competitive games before you can move on to the next step. To keep your place on the board, you’ll need to play at least one competitive game a week and spend some time playing the game.

As we said before, your rank won’t go down, but you won’t show up on the leaderboard if you go away for a few weeks.

To figure out what you’re doing right and what’s wrong as you rise through the ranks, look back at your past matches. Take a look at the steps below to see your match history:

You’ll be able to see things like how many wins and losses you had, as well as how many kills, spike plants, assists, and first blood you had. You’ll also be able to see how many kills, spike plants, and the first blood you had. It’s important to know if you’re a player who likes to get a little meta. This information will help you understand and improve your match performance.

As a bonus, you can also see how other people did in the same game. To start, choose a game and look at the information on the site.

If you look at Riot Games, they say that no two players will ever be on the same rung or spot on the ladder at the same time. When you play a game, you move up or down the MMR ladder based on how well you do. It’s just a number that helps the game match you up with people who are at the same level as you. It’s not the same as your RR or Rank Rating.

It is the number of points you get after each competitive game. You get RR points based on how well you did in the match, especially in lower tiers.

To move up to the next level, you need to get 100 RR points. Point allocation varies from game to game, but in general, it looks like this:

If you don’t get any RR points in the game, you could be demoted to the next level. There is “demotion protection” for players in Valorant, and it means that you won’t go below 80 RR for your new rank.

Getting back up to your old rank will only take you 20 RR. That’s good news, but the bad news is that you had to get down in the first place.

People in Valorant score their MMR and RR in two different ways: One helps the game match you with the right people, and the other tells you how well you did in competitive mode.

It can be a little hard to understand this part:

Riot Games wants to match you up with people who are good at what you do, but they only have a “idea” of how well you’d do. Idea: This “idea” is your match-making score. Both your MMR and RR are taken into account when people think about making matches to test you.

If you “pass” the test or keep winning, you show that you belong higher up on that ladder and will be matched with players who are more like you. RR points will also change.

Win and lose: When you win, you’ll get more points and lose less. To put it another way, all those extra RR points help you get ready to move up in your rank estimation.

As time goes on, Riot Games wants all of its players to move toward “convergence” for their MMR and RR scores. Your RR should show how well you did, and your MMR should show that you belong in that rank.

Climb the Ranks With Skill, Not Grind

“Grind” your way to the top of the leaderboard by playing as many games as you can. That’s not how you get ranked. It doesn’t just matter if you win, but how you do it and the skills you used in your games are also important. If you want to move up in Valorant’s rankings, it’s all about quality, not quantity.

In Valorant’s ranked mode, how long does it take you to move up from one rank to the next? There is a comment box below where you can tell us about it.