What Is Iron Golem in Minecraft 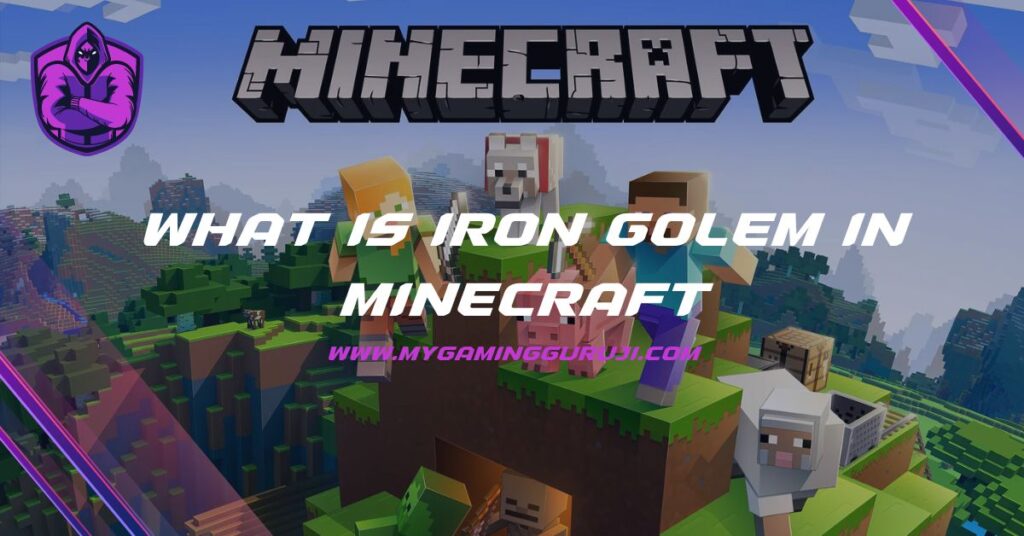 Iron golems are enormous, powerful mobs in Minecraft that players can make to secure their towns and defend against attacking mobs. Iron golems are one of the game’s strongest mobs, composed of four iron blocks and one pumpkin or jack o’ lantern.

They stand about three blocks tall and have a robust, muscular appearance, with broad shoulders and arms that finish in huge hands.

Iron golems are non-aggressive creatures that will not attack the player unless provoked. They are, however, very protective of their community and will attack any mobs that pose a threat to the people or the village itself.

This includes both hostile mobs like zombies, skeletons, and pillagers and animals like wolves and stray cats. Iron golems can also attack players that assault the people of the village, making them an invaluable asset for defense.

Iron golems are extremely strong and resilient, and they can withstand a great deal of harm before being defeated. They have a large health pool and are resistant to most sorts of damage, making them difficult to defeat by hostile mobs.

Iron golems can carry objects for the player in addition to their combat powers. They may be ordered to follow the player and will carry any goods placed in their inventory by the player.

This can be used to move large numbers of stuff or to protect important objects from hostile mobs.

Iron golems are a crucial asset for any player wanting to defend their hamlet from enemy hordes. They are strong and durable, and they can take a lot of harm while also dealing a lot of damage. They can also transport the player’s stuff, making them helpful for transportation and item protection.

Consider making an iron golem to help you safeguard your community and defend against attacking creatures in Minecraft. Simply gather the required ingredients and follow the steps to make the iron golem, and you’ll have a powerful partner to aid you in your adventures.

It’s worth mentioning that iron golems will only spawn near a village. If you don’t already have a village, you can make one by installing enough doors within a specific distance of each other. This will allow you to construct an iron golem to guard your base and defend against hostile monsters.

To make an iron golem, you’ll need four iron blocks and one pumpkin or jack o’ lantern. These resources can be produced by mining iron ore and breaking down pumpkins.

Once you’ve gathered your supplies, arrange the iron blocks in a T form on the ground and lay the pumpkin or jack-o-lantern on top of the middle block. This will result in the creation and emergence of the iron golem.

After you’ve built the iron golem, you can control its actions by right-clicking on it. This will bring up a menu where you can give the iron golem directives like attacking surrounding creatures or following you.

You may also use the iron golem to defend your hamlet by assigning it to a certain region or having it follow you around while you explore.

To summarize, iron golems are powerful and helpful Minecraft mobs that players can make to secure their towns and defend against hostile mobs. They are useful for players who want to protect their fortress and stay alive in the dangerous world of Minecraft because they are good at fighting and can carry things.

PrevPreviousHow To Make An Iron Golem In Minecraft
NextWhat is Minecraft?Next